All of the latest news will appear here...

Please email admin@nrgnetball.co.uk to register your interest, we look forward to hearing from you!

Please register your interest by emailing admin@nrgnetball.co.uk, stating your preferred playing positions and what school you attend. We look forward to hearing from you.

Our U19 squad have already secured a place in the Regional League for next season which is great, we are looking for girls in current yr 11, 12 or 13 who are keen to play higher level netball.

NRG are delighted to offer Easter Camps in April to both members and non members all COVID compliant:

Email admin@nrgnetball.co.uk for a booking form - limited spaces due to COVID.

NRG are looking for players who would like to play Junior netball at a higher level. We are intending to enter teams in U13, U14, U16 and U19 age groups for the 2019/20 season - trials will be on Tuesday 23rd April, Tuesday 30th April, Tuesday 7th May 7-8.30pm at Worthing College, £3 per session. You are expected to attend all 3 sessions.

Please email sarahbriggs1@btinternet.com if you are interested in trialling, we look forward to hearing from you.

Massive congratulations to Sussex NRG players for successfully gaining places in the Surrey Storm squads for the coming season.

Shelby Harris and Olivia Miller in the U19 NPL squad and Iona Gardner in the U17 squad.

We look forward to supporting you on this exciting season ahead.

On Sunday 21st May Tigers travelled to Surrey Sports Park aiming to gain promotion to the South Region Division 1 Legaue. They started well beating Shooting Stars 47-15 and won their second match v Abbey 41-26. In the third and final match they beat CD Phoenix by 1 goal to secure promotion, a great display by all of the squad.

NRG's Shelby Harris earned her first 3 England caps last weekend representing England at the Netball Europe U17 Championships. Shelby played against Northern Ireland, Wales and Scotland and helped the young roses win all 3 games to be the champions. Shelby has also been selected to attend the England National Academy Easter and Summer Camps which is a brilliant achievement. Well done Shelby!

NRG's Shelby Harris has been selected for the England U17 squad of 12 to play at Netball Europe on 3-5th March in Belfast. Shelby had trials in Derby last weekend whilst training with the National Academy and was delighted with her selection. All of NRG are so pleased for Shelby and look forward to seeing her in the red dress of England for the first time!

NRG were victorious in the Butlins Open netball tournament played on 9th and 10th July. They were undefeated all weekend winning 6 matches on the Saturday to top their group then 5 group games on the Sunday. After beating a Shooting Stars team 10-2 in the semi final they went on to beat another Shooting Stars team 6-5 in the final, a great performance by all the squad and a brilliant weekend at Butlins was had by all!

Sussex NRG hosted a netball coaching day for 60 yr 6-9 girls at Chichester University today. The girls were coached by Super League players Georgia Lees and Mikki Austin and they had a great time learning new skills, tactics and then putting what they had learned into match play. See our gallery page for lots of photos! 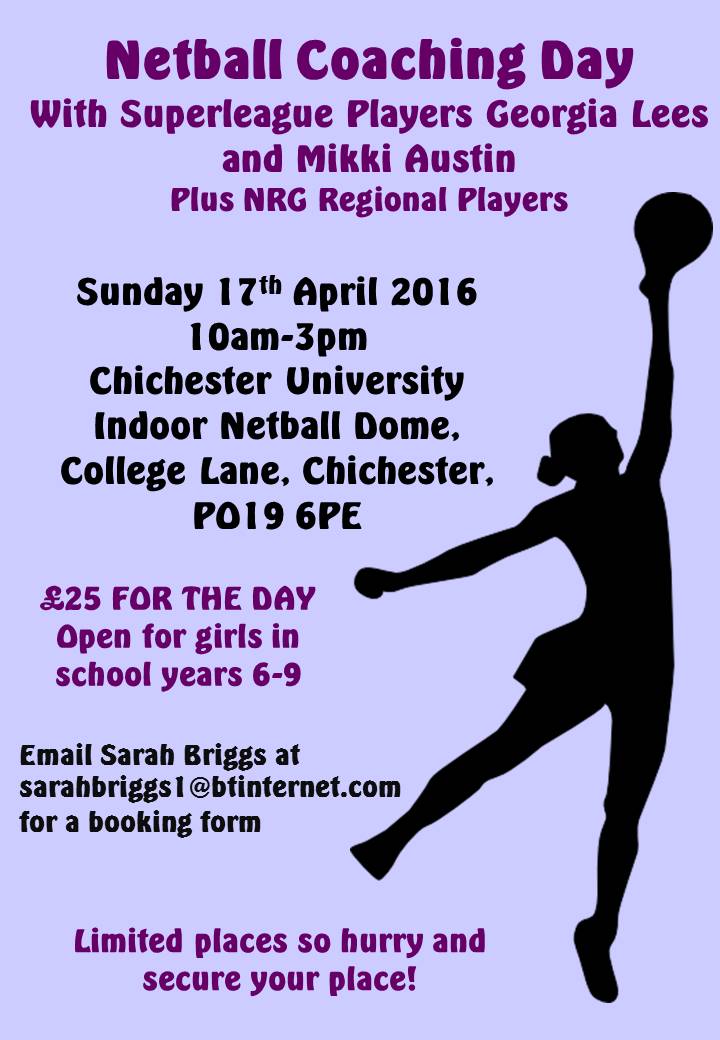